WTF is a SKAdNetwork?

In recent years, Apple has been on a mission to protect user privacy. SKAdNetwork – a privacy-first ad framework first deployed by Apple four years ago – is a vital part of that mission. It represents the future of advertising analytics on iOS and, quite possibly, a blueprint for other ecosystems including Android to follow.

SKAdNetwork was created as an alternative to Apple’s Identifier for Advertisers (IDFA); a familiar advertising ID attached to a user’s device. IDFA allows advertisers to track user interactions to attribute them to a campaign ‘deterministically’. The initial rollout of SKAdNetwork in March 2018 had no immediate impact on the mobile marketing industry, with advertisers continuing to use IDFA as normal, blissfully unaware of what was coming. However, in June 2020, in the context of rising consumer awareness around privacy and the value of personal data, Apple shocked the mobile advertising industry by announcing major changes to how advertisers could access its IDFA.

The most seismic change was in the form of the introduction of app tracking transparency (ATT). This would require users to opt-in to share their data with advertisers every time they opened a new app. In doing so, they would allow advertisers to continue using familiar deterministic attribution with IDFA. However, when ATT was first introduced, estimated opt-in rates were reported to be in the region of 15%.

WTF actually is a SKAdNetwork?

Starting from the beginning, the ‘SK’ is shorthand for ‘StoreKit’, Apple’s developer framework; and the technology is an aggregate for measuring mobile ad campaigns for iOS apps. Put (relatively) simply, it’s a privacy-friendly framework designed to provide advertisers and ad networks with aggregated campaign performance data about acquired users, without revealing any user level details. Because it is privacy-centric at its core, it has a range of limitations when compared to the previously dominant IDFA and deterministic attribution. There is also an additional layer of complexity for advertisers that want to comprehend the framework’s data.

SKAdNetwork differs greatly from IDFA and deterministic attribution in that it doesn’t reveal user or device-level data to attribute impressions and clicks to instals of iOS apps. Contrary to popular belief, the IDFA hasn’t been ‘killed’ or ‘ended’, but ATT does now require users to permit advertisers to use IDFA, whereas previously it would work in the background to track users automatically. If iOS users opt-in when they open a new app, advertisers can then track them and access their device ID.

If the user refuses to share their data, the advertisers must rely on more subtle signals under the anonymised SKAdNetwork, or use frowned-upon fingerprinting methods. Fingerprinting attribution runs the risk of advertised apps being rejected from the App Store in the future. Apple calls out fingerprinting as not permissible in their guidelines, but has not clamped down on it yet. SKAdNetwork doesn’t carry such risks; it works for both opted-in and opted-out users while protecting the privacy of each.

What has its impact been?

With a 24 hour data privacy threshold and no real-time marketing events available, SKAdNetwork made it incredibly difficult to determine where users were coming from, what their value was, and what marketing campaigns were working. This was especially true at the onset, when SKAdNetwork data was being passed from Apple to ad networks, rather than directly to advertisers themselves – a situation that was resolved in September 2021. From iOS 15 onwards, advertisers have received copies of the ‘postback’ (data) that is sent to ad networks, but only a minority of advertisers are currently making use of this.

That’s because, even with unfettered access to SKAdNetwork data, publishers required commitment from development teams to support it, and data scientists to make sense of it. They were no longer able to lean on traditional mobile measurement partners (MMPs) for install data, standard analytics (DAUs, sessions, revenue, retention), LTV metrics, ROI and ROAS, as they had previously.

This has driven many app developers and publishers – most (68%) of whom don’t have access to in-house data science – to more seriously explore automating their marketing processes such as the collection and storage of data. Manually collecting, importing, and analysing vast, disparate, anonymised SKAdNetwork data sets is enough to grind any marketing team to a halt.

What are the benefits?

Can there be benefits for the mobile marketing industry if it can’t show targeted ads to the majority of users? Potentially. Let’s wake up and smell the coffee; the majority of users, particularly in privacy-aware European markets such as Germany, aren’t going to opt-in to ATT. This makes SKAdNetwork, which functions for all users regardless of their opt-in status, the only white-hat method for advertisers to optimise performance for 100% of iOS users.

If SKAdNetwork does reach mass adoption, it could therefore represent a reset in the relationship between users and advertisers in the long-term. However, given the choice, the vast majority of advertisers still use deterministic attribution for opted-in users, delaying the short-term pain of getting to grips with SKAdNetwork.

SKAdNetwork, with Apple as the ultimate arbiter, is changing the relationship between advertisers and self-attributing networks (SANs) like Facebook and Snapchat. These networks can no longer limit access to their data and are treated in the same way as smaller ad networks.

Additionally, ad networks have hidden their sources of traffic (app names) from advertisers, but under SKAdNetwork, this is no longer possible. One of the SKAdNetwork fields shared with advertisers is ‘source-app-id’ which corresponds with the app ID in the App Store – giving advertisers much greater clarity.

Another major upside of SKAdNetwork is the potential to cut down on fraudulent attributions by raising the technical bar for fraudsters. Previously, bad actors could work the system with relative ease and utilise hidden adverts, fake ads or fake clicks because there was no ‘middle-man’ to verify information between user and publisher. SKAdNetwork improves security by adding a cryptographic signature to each ad impression verifying the integral data, without compromising any information on the user who viewed or clicked the ad.

Other improvements include measurement of the performance of web-to-app ads which direct to the App Store, which will now be attributed to the SKAdNetwork, a feature previously left out which meant many users fell through the cracks. With these updates, Apple potentially also gets closer to ending device fingerprinting, a practice it has always been clear it doesn’t allow, but may have tacitly permitted while it gets SKAdNetwork’s full suite of features online.

In some ways, SKAdNetwork has been something like a live service video game that was released before it was really ready. It is improving, though. As a part of the recent SKAdNetwork 4.0 update Apple announced it would lift the cap on the amount of data advertisers could pass with campaign ID, in addition to other gradual improvements which will see the framework roll out all features and reach its full potential, at scale, at some point in 2023.

One major impact of SKAdNetwork was a redistribution of ad spend away from iOS towards Android – both Google Play and alternative global app stores such as Huawei AppGallery and Samsung Galaxy Store. This is creating a more diverse market, with more choice for developers and advertisers outside of just iOS and Google. Likewise, Google has responded to Apple’s privacy-first changes with some of its own, announcing an expansion of its Privacy Sandbox to mobile and potentially signalling the end of the Google Ad ID within the next two years.

It remains to be seen whether a more diverse, competitive market is the long-term direction of travel. Slowly but surely, Apple is refining the SKAdNetwork to better capture data for advertisers while protecting users. It is certain, though, that the long-term direction of mobile advertising is privacy-first and, for those advertisers still mourning the IDFA, it’s time to move on to SKAdNetwork. 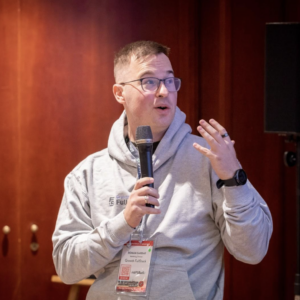 As Tenjin’s Marketing Director, Roman Garbar uses his extensive knowledge of mobile marketing analytics to educate indie and mid-size publishers on how to grow their apps and games. He is a prominent thought leader in the mobile marketing industry and a regular contributor to the likes of VentureBeat and AdExchanger. Roman was the architect behind Tenjin's leading industry research into the impact of Apple's privacy-first changes on mobile advertisers.