Despite the trend declining towards the end of last year, the number of people choosing to block ads in Germany is rising and eMarketer predicts that in 2017 it will hit 18.9 million which equates to 29% of the country’s internet users.

Early ad blocking adopter, Germany has one of the highest ads filtering rates in Europe, followed by France and the UK, all of which see the software use rate standing higher than the global average. 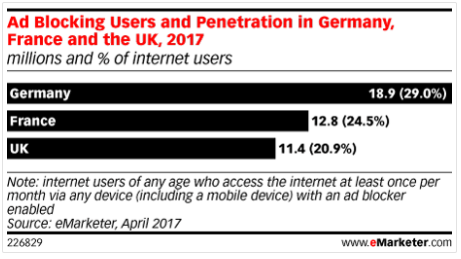 “On the other hand, internet users understand their favourite sites and apps typically need ad revenue to survive. So, they’re definitely prepared to compromise,” she added.

The study from eMarketer also found that historically it was the younger age groups and males that used the software, but although the age gap remains, the gender differences are less pronounced. In Germany, the gap is expected to disappear altogether in 2018. 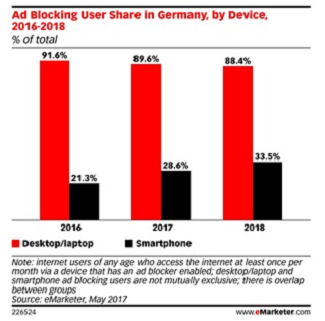 Filtering ads has become a contentious topic in Germany where the technology is believed to be relatively well developed. Many local publishers have taken a tough stance on the issue by either turning away those who use ad blockers or asking them to disable the software. In a more radical move, German publishing giant Spiegel Online took legal action against Eyeo, the creator of one of the most popular ad blockers in Europe  - Adblock Plus.

The managing director of MOBKOI’s newly launched German office, Vera Huebner, believes the ad blocking debate in Germany is about attitude and education as many feel entitled to consume media for free. She suggests advertisers need to acknowledge that many Germans are sceptical towards data collection therefore more transparency should be put in place.

“Advertisers and media agencies, or service providers such as ourselves, must also work together in order to produce adverts that are non-intrusive, polite, and user-initiated. Ad blockers were first introduced thanks to poor quality adverts that were more of a nuisance to the user, but with new technologies there’s no longer an excuse for poor quality ads,” Huebner explained, adding if advertising was more creative, ad block rates would fall.

The PI Newsdesk brings you quick, day-to-day updates from the performance marketing and affiliate marketing industry, helping you keep an eye on the competition, whether that's product launches, key partner wins and more.