AdCombo is a large international CPA-network with a wide range of exclusive Cash-on-Delivery offers. A great number of GEOs, in-house translation service, timely biweekly payouts and multilingual support make any collaboration with AdCombo profitable and effective.

Affiliate marketing is every bit the global phenomenon it had the potential to be. Online sellers reside in all corners of the globe, which means publishers have an unfettered choice when it comes to where and for whom they work for.

Last year, the IAB had earnings from affiliate marketing within the UK at nearly £1.6 billion, while spend in the US is forecast to hit $5.4 billion in 2017, according to Forrester, up from $4.7 billion in 2016.

Nevertheless, the rude health of the affiliate channel in these markets is common knowledge. Fewer ad trading bodies and mainstream press articles focus on the regions where even smarter money is being made; the places with strong compound annual growth and an environment primed for big business.

Let’s take a step back with a look at some of the top markets for online selling as a percentage of all retail sales, according to Invesp: 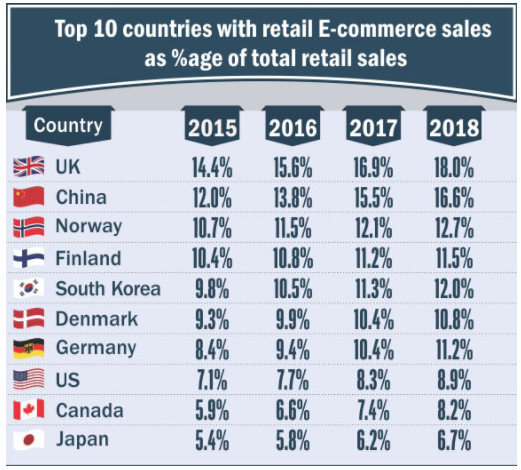 The UK stands tall as a keen e-commerce adopter with the potential to have 18% of its sales occur online by 2018, but the US falls to the likes of Denmark and Norway when it comes to the percentage of sales that happen online. The table makes room for China, Japan, and South Korea - all situated in Asia where online sales are high despite affiliate marketing being in its relative infancy.

We can’t predict the future, but the indicators are there to guide publishers and advertisers to some of the areas where affiliate marketing could boom yet again.

Using AdCombo’s global reach and our own in-house research, here are five emerging markets to bear in mind:

Sweden might be a little way from sharing the same breath as the UK, Germany, and France when it comes to online selling, but affiliates are advertising to a high-earning population, whose propensity to buy online is going from strength to strength.

In Q2 of 2016, the country saw its e-commerce revenue lift 18% year on year, driven by the growth of 38% for the food sector. ‘Slow but steady’ seems an apt description for Sweden’s adoption of online selling. Indeed, PostNord’s view of the country’s e-commerce spend up until 2015 shows the level of growth remaining at a similar level for over a decade, yet the market awaits its saturation point.

As well as the emergence of food as a popular product category, services linked to the construction trade grew on a similar level in Q2 2016, rising 37% over the year, and it's these snippets that may pique the interest of niche publishers and sellers across the globe.

Analysts note that men tend to shop more frequently than women, although the difference is “insignificant”. More important, perhaps, is that Sunday is the most popular day of the week for buying online, and there is plenty of business in the offing at 9:00 - 10:00pm, according to research from last year.

Experts say that retail has the biggest share of the market when it comes to affiliate sales, with online dating, finance and gaming offers settling for a backseat. Publishers chiefly drive traffic via paid search, then SEO and lead gen practices, with social media playing less of an important role in affiliate activity compared to nations like the UK and Germany. As expected, plain text links are a good way of driving traffic, with less of a take-up for banners and product feeds.

Affiliates should also note that despite being high earners, Swedes are increasingly after a discount to be applied before they reach the checkout, as savings codes become more of a key element for retailers.

Slovakia is the epitome of an e-commerce ‘up and comer,’ with analysts predicting annual online spend to hit the big $1 billion within the next five years. In 2015, that total was right down at $600 million, despite relatively healthy figures for web usage.

Research shows 82% of Slovakia’s connected population use the internet every single day, with this number rising to 98% among browsers aged 16-24. When looking into popular sources of traffic, publishers should be aware of the high usage of search engines and email accounts, indicating that good SEO and a strong mailing list wouldn’t be a bad idea. 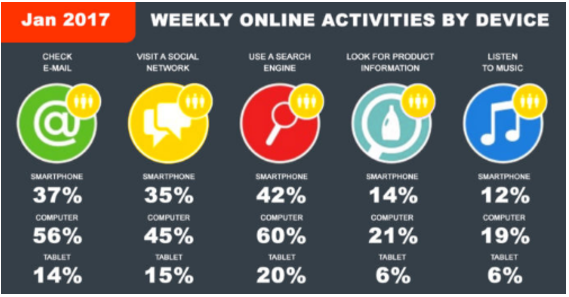 Facebook reigns high as the social network of choice, claiming a 77% share of the market despite support for Pinterest, which manages second place at 10.6%. In Slovakia, the uptake for Twitter pales in comparison to that of Pinterest as well as Tumblr, both of which benefit small publishers using blogs and images to monetise their work.

Slovakia has a modest economic outlook, with Slovaks earning an average of $942 per month in 2016 but still making room for purchases - spending nearly $110 of their monthly salaries online, according to Pricemania. The same survey noted a lot of price sensitivity around the local customers, as well as highlighting their demanding nature when compared with consumers across Western Europe. Local analysts have seen high demand for products across electronics, sport, and hobbies, while Statista notes huge popularity for flights and hotels.

Another interesting fact about Slovakia centres on the sheer amount of locals that complete their purchases on a desktop. This is a declining yet common practice observed across the globe, but very few markets will offer a mobile sales share as low as 4%.

Targeting users in Eastern Europe could be a shrewd move, especially considering the amounts spent in places like Russia and Ukraine. Those looking to test the waters should keep an eye on Estonia, where impressive figures for latency and download speeds help create one of the most advanced telecommunications markets on this side of the continent.

Estonians make good use of their connections, with over 90% of the population benefitting from the internet, which is mainly accessed via mobile. Affiliates may wish to know that while Estonian is the dominant language, Russian is also spoken by approximately one in three citizens. It’s therefore of little surprise to see that Russian search engine Yandex is Estonia’s 12th most popular website, which could mean an easy entry into the market for a publisher with existing connections there.

The path to purchase sees mobile only in limited demand as 92% of consumers choose to check out via desktop. As for the profile of each customer, future projections show little bias towards either gender despite males currently leading the way.

Sky-high order values were behind annual spend of $242 million in Estonia last year,  suggesting fairly low competition for business. Yet, with this set to rise to $437 million by 2021 - coinciding with recent increases in salaries - many would expect the level of opposition to intensify.

A quick glance over the findings above might raise questions over the notion of Indonesia being an affiliate gem in the making. Look beyond those numbers, though, and the true picture emerges.

The country’s e-commerce revenue of $18 billion for 2015 sits way behind some of the figures posted by its Asian counterparts. However, TechCrunch sees spend in the continent’s ‘next biggest online market’ totalling to $130 billion in 2020, powered by a mobile-first generation of web users.

Indonesia itself is becoming a more middle-class proposition. Online shopping is increasing, partly due to business in second-tier cities, where citizens lack access to big-name stores, and there is money to be made on offers pointing to specific product categories. In particular, the female beauty market is tipped for big things, as most of the 65% of women who control online purchasing in Indonesia prefer to buy items like cosmetics over food and clothes.

It’s believed that 70% of the country’s traffic stems from smartphone and tablet devices, but mobile isn’t the only big talking point here. Social media is another key attribute for the market which claims the prize of Facebook’s highest usage rate on mobile. Additionally, a study from Female Daily highlights the popularity of forums, blogs and chat groups as popular referral mechanisms, while international e-commerce sites are also in vogue among women, who spend $20-40 per purchase.

In the dawn of online selling, we saw traders in the UK and the US reap the early rewards. Now, many of the big growth spurts are happening in Asia, where nations with huge populations are waking up to the convenience and ease of buying online.

Many publishers should already be tracking progress in China, a known e-commerce behemoth where affiliate marketing is still finding its feet. With an eye on the future, the channel’s patrons could look at South Korea as a China in the wings.

While billions are already being spent by the 99% of South Koreans that make up the world’s most connected population, their nation’s continued pursuit of mature e-commerce players means the likes of Forbes are still at the stage of introing the promise held by South Korea to its global audience of business pros.

Still, affiliates are already taking advantage of e-commerce growth in the nation - and in a big way. Daily deal site WeMakePrice is recognised as one of the top destinations for unearthing a bargain, potentially on travel, clothing and household items, which are recognised by KOSTAT as some of the most popular product categories.

Average income within the country is a little lower than average, although this fails to take into account a gulf between top and bottom bracket of earners - the former earning nearly six times more than the latter. Females are much more likely to buy than males (57 vs. 50%, according to eMarketer), and social media could be a good way in for affiliates, as 15% of shoppers have bought a product after seeing it advertised on a network, with 17% buying directly from this source.

A significant lack of good resources on the nation’s affiliate potential would suggest that cross-border publishers are yet to make their mark in South Korea. Perhaps 2017 could be the year that many chip away?

For more up-to-date insights on web usage across the globe, head to the AdCombo blog. 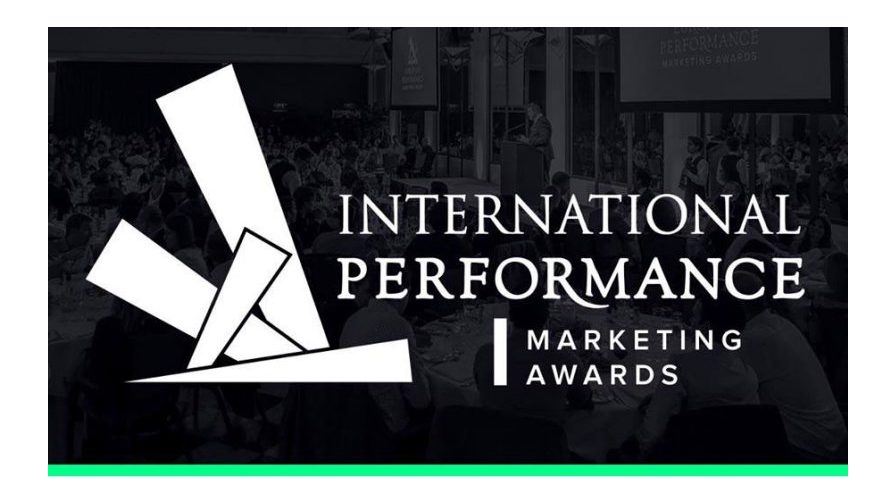