Performance media is evolving – data and technology are changing the game, transparency and accountability are crucial, heritage costs models are out-dated and there are clear disconnects within media in an increasingly connected world.

Following the recent IPO [initial public offering], Snapchat continues to develop its offering for advertisers by unveiling a new self-serve platform that will be made publically available in June.

Currently, the dashboard has been tested by over twenty brands in the US on early access, and it will soon be open for application on the Snapchat website before the wider launch in the next few weeks.

Snapchat’s Ad Manager is a dashboard that allows any marketer access to purchase, optimise, and report on their Snap Ad campaigns. Where previously advertisers would have to hit a minimum spend thresholds and have the activity managed by Snapchat or work with third-party providers like 4C or Amobee, now they will have the ability to manage the campaigns in-house.

This is a huge step towards the reported target of $1 billion of ad revenue on Snapchat for 2017 as the new application will allow any advertiser to purchase all Snap Ad formats: app installs, long-form video and web view. For the moment, Snapchat will focus on the Snap Ad formats, but with geo-filters already available from a self-serve perspective, it will only be a matter of time before they roll all formats into the dashboard. 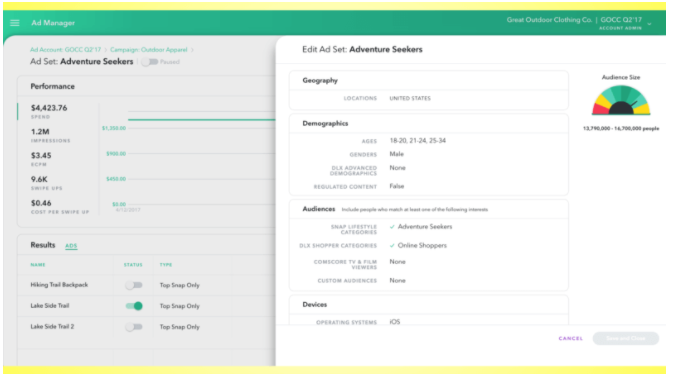 Since October 2016 there has been a wide range of Snapchat Partners that have offered a way for advertisers to promote across the vertical video offering without having to reach the minimum spend. Each of these partners has a unique ability to help develop the offering of Snap Ad promotion, including TV sync and enhanced targeting abilities, as well as fluid budgets across other platforms. These companies will continue to work closely with Snapchat to build out the capabilities of the platform and remain a quick, simple entry point for a wide range of advertisers.

Learning from other platforms the Snapchat Ad Manager has a similar set-up to other platform-owned interfaces with the ability to centralise a range of roles and permissions, access levels, billing contacts as well as individual ad accounts for specific clients or brands. The ability to manage a range of profiles and ad accounts is integral to the growth and continued use of the platform as it will only enhance user’s ability to set up multiple campaigns, targeting options, and creative tests to ultimately prove the platform's worth.

When the platform opens up, it will expect to follow Instagram’s rapid rise of paying advertisers, which saw the total user base grow from a handful to over 1 million today. From a media agency perspective, this will be critical to the success of Snapchat as lasting social media platform. The continued success of Facebook, Instagram and Twitter is due to the continued development of their ad buying tools where now they are simple, quick and effective so if Snapchat can build on the tool then advertiser’s spend will only increase.

Not only will Snapchat offer the standard dashboard Ad Manager but also have developed a simple mobile dashboard that is linked with users existing profiles, offering them the ability to monitor performance on the go without having to download a new app. This again is a step forward as the feature is not currently offered by any other social platform.

The announcement and the impending release of the self-serve platform ties in nicely with new research from App Annie that shows there are millions of users that are exclusive to the platform and cannot be reached through existing social media platforms. Over 30% of the 10+ million daily active users cannot be reached by Facebook, and given the excitement around the audience of Snapchat and its meteoric rise in favourability of younger audiences, this could prove invaluable for the platform and advertisers alike.

This is a compelling argument to include Snapchat into clients’ media mixes and is true, however, as with all advertisers, it will be integral to success to ensure that there is a balance between each platform. Snapchat has an efficacious argument to be included for all awareness activity, however, until it develops its lower-funnel offerings, it will struggle when compared to the rest of the social media landscape.

It is nigh impossible to compare Snapchat to any of the other social media companies as it operates in such a unique way. While on Instagram most people vie for increased followers or to present a specific persona, Snapchat is about communicating to a small group of friends and engaging in a fun and personal way. The difference in the way consumers use these platform is why only a few of the USPs [unique selling points] of Snapchat have worked when taken out of the environment. Instagram Stories is a success with more DAUs [daily active users] than Snapchat, however, MSQRD and Facebook Stories seem to have fallen flat as most people do not use Facebook for these features.

The beauty of the new self-serve tool is that not only does it benefit Snapchat but it also opens up the option to purchase ad space to an entire group of advertisers who previously were unable or unwilling to try. This will give agencies the tools to develop campaign strategies that can include Snapchat in campaigns where previously there were barriers.

This self-serve option does not just remove the entry fee but will also allow advertisers far more autonomy over how each campaign is run. A huge amount of detail goes into how campaigns are set up and managed with all new variation of targeting available, a range of goal-based bidding models including a bid for swipes and bid for installs. In addition to the targeting and bid models that are included, advertisers can also manage a range of key assets directly within the tool from first-party audience lists built up from emails and mobile IDs to video creative.

The reception from brands that have been given early access use of Snapchat Ads manager so far has been hugely positive, with elements like the detailed targeting capabilities and the App Install formats being called out specifically. With the perpetual rise of influencer marketing, Snapchat will look to maintain its progress as a leading opportunity for brands to utilise influencers in a range of innovative and personal ways outside of YouTube and Facebook.

As Snapchat continues to open up to new means of measurement and authentication and the Ads Manager dashboard develops, it is likely that the investment in the platform will only continue to rise.