INside the Boardroom: CEO at VigLink, Oliver Roup

It’s not news to anyone that mobile devices have completely changed the online marketing industry, affiliate included. Apps, mobile responsive websites, and social media have become increasingly important platforms for marketers to incorporate into their campaigns. Recently, eMarketer published ... 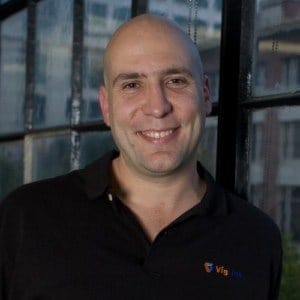 It’s not news to anyone that mobile devices have completely changed the online marketing industry, affiliate included. Apps, mobile responsive websites, and social media have become increasingly important platforms for marketers to incorporate into their campaigns. Recently, eMarketer published a study showing how mobile ad spend is growing compared to desktop.

This year it is predicted that mobile will be at par with desktop, and in future years marketers will spend significantly more of their budgets on smartphones and tablet devices. By 2017, mobile spending is expected to be double that of desktop. If we read further into eMarketer’s report, it’s interesting to see which ad formats are predicted to have the most growth for US mobile ad spend: banners, rich media, sponsorships and “other.” In the footnote “other” is described as native ad formats, such as Facebook’s News Feed and Twitter’s Promoted Tweets.  Although currently understated, it’s probable that these formats will be the biggest drivers of future mobile growth. When considering e-commerce as a marketing goal one must also not overlook a fast-growing category driving consumer traffic, in-content hyperlinks.

It’s not the format of a hyperlink itself that will give rise to mobile success, but rather the ecosystem surrounding the link and how it is utilised. Historically, the affiliate industry has experienced poor performance over mobile due to smaller screens, difficult shopping experiences, and broken links between publishers and retailers. These points are all valid, however, there is a product category that has succeeded in the face of these challenges.

Since we, VigLink, began monitoring mobile vs. desktop activity across the marketplace, the ratio of mobile earnings per click (EPC) compared to desktop for over a year has remained at roughly half.  But not for sneaker fashion.  In Q4 of last year, sneakers’ mobile in-content traffic EPC performed at 2.6 times that of sneaker in-content desktop traffic. Audiences were buying these shoes after clicking on links from their mobile devices more often than the same links from desktops. Mobile’s significant performance for sneakers should not be viewed as an anomaly, but rather a model for other product categories to follow. Here’s how:

Within the sneaker community, there is a growing segment of influencers who publish content specifically about the styles, care and upcoming launches of sneakers.  These influencers bring historic principles of word-of-mouth marketing into the modern digital world. Given their expertise and the unbiased nature of their opinions, they attract consumers who look to them for updates and reviews.  These audiences seek content on products not endorsed or sponsored by the brand but from experts with real opinions and experiences.   A few examples of these influential publishers are:

These product announcements have some of the highest performance mobile metrics for several reasons. Consumers trust this content and seek it when making the critical decision of what to buy. It can also be accessed immediately when a product release drops. From a merchant’s perspective, these influential publishers are the best brand ambassadors to influence consumer opinion.

See this post from TBlake as an example. This is exactly the type of post that drives traffic and performs well.  With credibility already built from an expansive history of editorial content to engage with, TBlake’s audience is extremely influenced by such posts.

While a publisher can be effective in driving quality traffic with high purchase intent, it’s up to the merchant to design a high-performing, user-friendly mobile page that converts this traffic into sales.  Mobile product pages with concise verbiage, quality visuals and a prominent “Buy” or “Add to Cart” call-to-action button lead to success.  Less is more when it comes to a mobile e-commerce page.  Brands such as Finish Line and Nike are just a couple of the leading mobile e-commerce merchants in the sneaker category.  Take a look at how easy it is to buy a pair of Nike Metcon’s, and it’s no surprise as to why Finish Line and Nike are successful:

There isn’t a silver bullet to success in mobile e-commerce.  Positive results stem from an ecosystem of merchants and publishers mindful of the consumer journey they provide together.  The sneaker industry represents a winning example of publishers and merchants doing just that, while targeting consumers on the platforms they’re using the most- mobile apps, blogs, and social media outlets.  With this mobile value-chain in existence, word-of-mouth principles can be highly leveraged for eCommerce success.

Oliver Roup is founder and CEO of VigLink, the premier marketplace for publishers to connect their audiences to high-quality merchants without needing to display ads.  Oliver brings over 15 years of software experience to VigLink.  Previously, he was a Director at Microsoft in charge of product for various media properties including XBOX Live Video Marketplace, Zune Marketplace and MSN Entertainment. He’s a board member of the Performance Marketing Association and chair of the PMA’s Content Monetization Council. Oliver received his bachelor’s and master’s degrees in computer science from MIT and his MBA from the Harvard Business School.