I believe that all of this matters as much today as it did in 1912 ~ because the performance marketing world, like the sports world, is not about survival of the fittest anymore; it’s about the survival of the fastest. 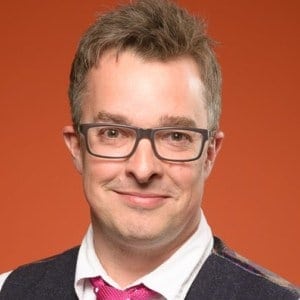 I was lucky enough to wander around Stockholm Stadium recently, home of the 1912 Olympics. Sitting in the press box, I imagined what it would have been like to be a journalist reporting on the Olympics over 100 years ago. What technology would I have had access to? What would my audience have wanted to read about? How much would I have written and how long would their attention span be? A quick Google image search of any front page from 1912 demonstrates that their attention would be significantly more than the five seconds it is estimated to be today. Not far away from where I sat in the press box, I was reminded of the Olympic motto on the walls of the stadium…

The motto originated from the Dominican priest Henri Didon, who first expressed the words in the opening ceremony of a school sports event in 1881. Didon’s words weren’t intended to encourage athletes to be faster, higher or stronger than their competition. Just, faster… higher… stronger.

I can imagine Ralph Craig having those words running through his head before he won gold in the 100m final in the 1912 Olympics, setting a record time of 10.8 seconds.  100 years later, Tyson Gaye ran 9.84 in the same stadium. 100 years later and just a one second improvement.

Fellow athlete Michael Johnson was once asked what was the key to Olympic success. Johnson said that he worked 10 years just to improve by 1/10th second in the 200m, but that small improvement was the difference between a good college athlete and an Olympian. A perfect example of a marginal gain if ever there was one. If only more brands thought like performance athletes…

So what does all this mean for performance marketers?

Consider the 2015 CMO Spend Survey from Gartner, and look at the top three challenges that CMOs believe they are facing in 2015;

Sports analogies are overused in performance marketing, but the more I think about the challenges that marketers face in 2015, the more I think that this comparison is a good one. We often think we have technology problems. We don’t. We have people problems. We also think that we should be obsessed with our competition. We shouldn’t. The best CEOs, such as Jeff Bozos from Amazon, have this to say about competition and consumers.

“If we can keep our competitors focused on us while we stay focused on the consumer, ultimately we’ll turn out all right”.

Bezos doesn’t want to be faster, higher or stronger than his competition. He just wants Amazon to move faster, reach higher and grow stronger. All the great CEOs have shown a similar disdain for their competition. One of my all-time favourite CEOs is Jack Welch. Jack helped to build General Electric into the world’s 6th largest brand, with a turnover today exceeding $146 billion. He became GE’s General Manager the year that I was born in 1972, and he didn’t resign until 29 years later in 2001. During that time he often reminded employees of one of his favourite quotes.

Jack’s business philosophy from 42 years ago isn’t that dissimilar from Gartner’s CMO challenges or the Olympic motto is it?

Maybe it’s a happy coincidence…  Maybe these comparisons are a bit dubious and I’m over-thinking them… or maybe the more things change the more they stay the same? Whatever your take on this little observation, my conclusion is this: the best brands should aspire to the Olympic motto.

They do need to reach higher by inspiring their audience; whether that is their consumers, their employees or their stakeholders.

They do need to be faster by connecting with their customers in real-time; not when sales or service agents get around to it, but when their customers want to speak to them.

And they do need to build stronger brands by investing in better storytellers, better community managers, better media planners and better technologies to help them make good decisions faster.

Lastly, take a quick look at the Gartner Digital Marketing Hype-Cycle from 2014. It is a superb report regularly referred to as the benchmark for the future direction of the digital marketing industry. Despite all the mentions of “shiny” technologies that marketers love to talk about at conferences, do you notice what Gartner highlight as the most important technology due to mature over the next 10 years? Real-time marketing. Or in other words, “Responding to customers and changes in the marketplace faster”. Dealing with speed is both a marketer’s biggest challenge and their biggest opportunity. Performance marketers must keep up or they’ll get left behind.

Head of Digital Strategy, Marketing Cloud EMEA.  Jeremy is passionate about digital marketing, social media, cycling, whiskey and collecting vintage business books. You can chat to him on Twitter @JeremyWaite where you can ask if he really used to be a giraffe keeper and why he loves Dale Carnegie so much...