A ‘first-of-its-kind’ study into the effectiveness of online banner ads and their impact on the human brain has been released - with some striking conclusions.

A so-called “neuroscience perspective” on banner ads - a huge part of display advertising - has highlighted their failure to outperform native ads in terms of reader attention.

Conducted by sharethrough and Nielsen, notes from the study and its corresponding infographic show that banners receive “little-to-no” focus on the text, meaning they are mainly in the reader’s peripheral vision.

Native ads, on the other hand, are being delivered directly in-feed and designed as to seem cohesive with the content they’re paired with.

A second eye-tracking map shows the viewer applying “direct visual focus” to a native ad which makes its way into the bottom of the screen. 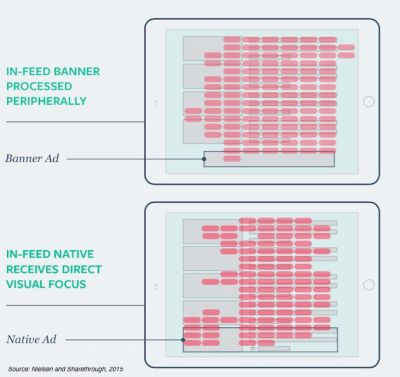 The study saw testing on over 350 consumers, with the results appearing to support the verdict of other attempts to pit banner ads against their native counterparts.

Other readings from the same piece of research saw native outperforming banners in terms of brand recall, reputation and purchase intent.