Targeting consumers when they are experiencing certain emotions has been proven to boost display ad engagement rates, according to a new report.

If a consumer sees an ad while they are an in the midst of emotions relating to rescue, reward and encouraging moments in gameplay, they are 543 times more likely to achieve brand performance metrics than other digital ad formats.

This new discovery was made by humanising ad platform MediaBrix for its fourth MediaBrix Social and Mobile Gaming Report, which compiled data from more than 200 social and mobile gaming advertising campaigns and over one billion impressions.

Going after consumers who were feeling defeated, frustrated or in need of help, labelled by MediaBrix as Rescue, resulted in click-through rates (CTR) that were 66 times higher than online and mobile rich media ads.

The reward stage, where consumers felt ecstatic about their high achievement or personal best, gave brands the chance to connect with users during a positive moment. It led to CTRs that were 50 times higher and engagement rates 460 times more than Facebook’s brand posts.

The encouraging moments allowed brands to present players with words of motivation so that they might do better. The concept produced not only 23-times higher CTR than online and mobile rich media ads, but also 106-times higher engagement on Facebook. 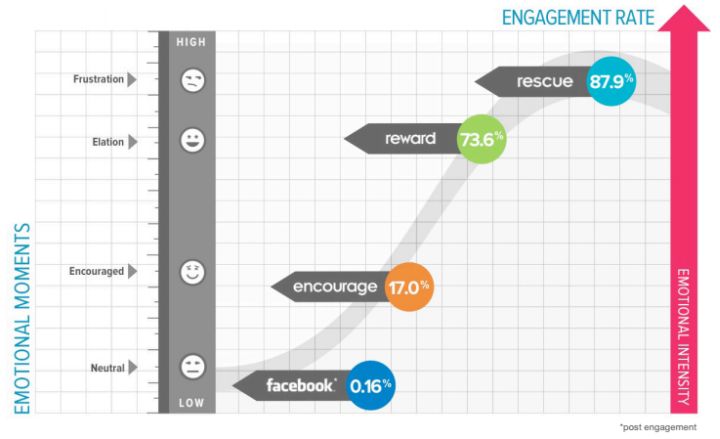 Most advertisers concentrate on disrupting the consumer while they’re playing their games. However, Ari Brandt, CEO and co-founder of MediaBrix, is hoping to make a success of an alternative that will annoy users far less.

"The key is understanding and acknowledging the state of mind of that user, then being respectful with your proposed interaction. Brands reaching players during emotional moments aligned to rescue, reward and encourage can fortify the user experience.

“Plus, this puts brands in a position to make true emotional connections with players, all the while driving the highest returns and brand performance metrics of any digital ad formats available today," he concluded.