As it’s January, we can expect a plethora of ‘December Wraps’ stuffed full of %’s, stats and overall trumpet blowing. However, despite the bumper results for retailers, there will be one day that gets consigned to a sentence or ... 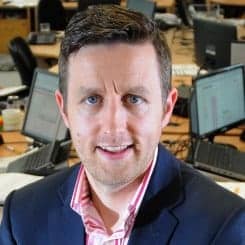 As it’s January, we can expect a plethora of ‘December Wraps’ stuffed full of %’s, stats and overall trumpet blowing.

However, despite the bumper results for retailers, there will be one day that gets consigned to a sentence or two, but very little more. Christmas day.

Of course, in years gone by it would be frowned upon the mere idea of shopping on Christmas day, but no longer. With the increase in mobile and tablet devices together with the trend for sales starting on the 25th, it’s fast become a key day on the retail battlefield.

I’ll confess to being a bit of a data nerd and genuinely getting a kick out of assessing live data analysis as the country starts to pull crackers and make toasts. However, it seems that I’m not alone when I venture online.

Our stats gathered across 500 retail websites show that Christmas day purchasing trends build rapidly as the nation unwrapped their new tablet device to spend some Christmas money from Grandma. That is until lunchtime, where we see a depression in the number of purchase that lasts up-to 4pm, when the conversation has died and Grandad has fallen asleep after the Queens Speech. At which point we see the sales volume increasing hour on hour until the evening when it slowly drops back as the days festivities take their toll.

As a comparison, we can see that Christmas Day generated almost the same number of sales as Christmas Eve (91%). When compared the Boxing Day it was dwarfed and only generated the equivalent of 46%, so maybe there are still a few traditionalists amongst us.

Another interesting view of Christmas day is based on buyer behavior as we saw a significant jump in abandonment rate when compared to Christmas Eve, jumping from 68.96% to 74.79%. Perhaps pointing at the number of new devices being fired up followed by the obligatory window shop and a degree of hesitation regarding whether the best price is yet to be had as the sales continue.

As you can see from out trend data, the pattern of abandonments follows the pattern of sales very closely, with less of a prolonged depression after the 1-2pm lunchtime hotspot.

We also saw a 1.24% increase in average email open rates on Christmas Day when compared to Christmas Eve (from 43.45% to 44.69%). Again, pointing to a spike in activity that can be explained by a number of users setting up a new device and checking their email – well it would be rude not to.

So it’s clear that the digital realm has taken a firm grip of the traditional Christmas Day and who knows, maybe next year we’ll see a spike in the number of video chats over lunchtime as we all decide to save on fuel costs and pull a virtual cracker!

Founder of SaleCycle, the industry leading re-marketing solution across the globe. I